This is a quick list of 10 commonly eaten “health” foods that bring your metabolism to a halt as well as put you at risk of THE most dangerous chronic diseases such as Heart Disease, Type 2 Diabetes, Alzheimer’s and even Cancer

These foods also sap your energy, make you cranky and irritable, slow your thinking and wrinkle your skin. When you remove them, you’ll likely feel a ton better. These are foods that most of us think of as “health foods” but that actually hurt you.

(At the end of the quick outline of the 10 foods to avoid, we have 5 super tasty recipes that are easy to make and trigger your lean body response.)

Agave has been touted as a health food because it is low-glycemic which simply means it does not raise your blood sugar quickly. HOWEVER- Agave contains high levels of FRUCTOSE, which contributes to insulin resistance, and helps you store fat, and trick your metabolism into thinking you are still hungry. 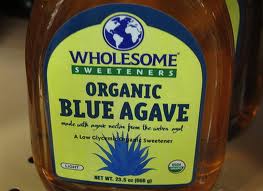 So the next time you see the Agave bottle sitting next to sugar and honey at Whole Foods, please don’t think that is the healthy option. According to Robert Lustig, MD fructose is metabolized in a way that turns it directly into fat.

“Sugar in excess is a toxin, unrelated to its calories. The dose determines the poison. Like alcohol, a little sugar is fine, but a lot is not. And the food industry has put us way over our limit.”

What IS a safe sweetener? Stevia is a popular option for many people. If you want something a little more exotic, The Chinese have used something called Monk Fruit Sweetener, or Lo Han Fruit. Monk fruit has become a popular sweetener in no-sugar-added coconut ice cream and other foods.

The Ultimate Guide to Protein